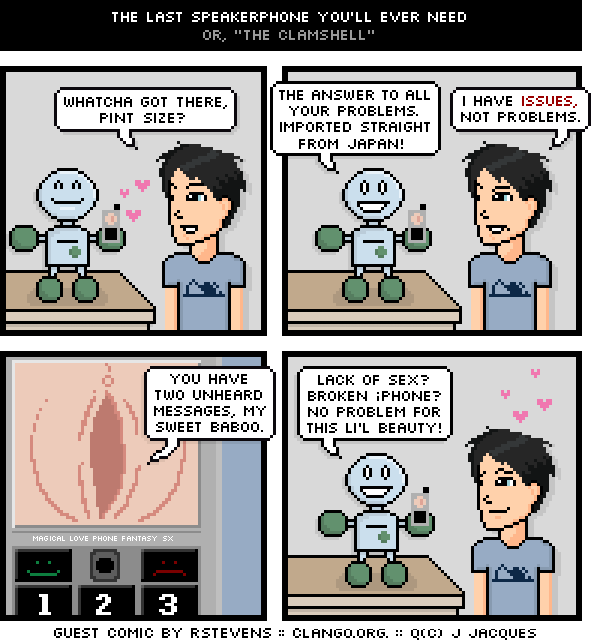 Today's guest comic comes to you courtest of an INTERNET INSTITUTION and one of the fellows with the most visually distinctive art styles on the internet, Richard Stevens III. If you're not already familiar with Diesel Sweeties and like rapid fire pungasms, his comics are for you. Also if you crave ANIMATED LABIAL ACTION, you may click here. NSFW, probably.

SDCC was fabulous today; thank you so much to everyone who came by the booth. I spent the evening in the company of the great Wil Wheaton. It was the first time I've seen him do his Book Tour Thing and he is a gifted fellow at it, almost Sidarisian in his delivery. Highly recommended.

Something of a postscript: roughly 90% of my adolescent and teenage years were spent religiously watching Mystery Science Theater 3000. It has informed my sense of humor to an extent unmatched by any other media. It is, in essence, my Humor Bible.

Tonight, I got to shake the hand of one Mister Tom Servo (aka Kevin Murphy), and attempt to explain to he and Mike Nelson what exactly their TV show meant to me. I failed, spectacularly. I still wouldn't trade those 30 seconds for anything. Comic Con is a magical time.