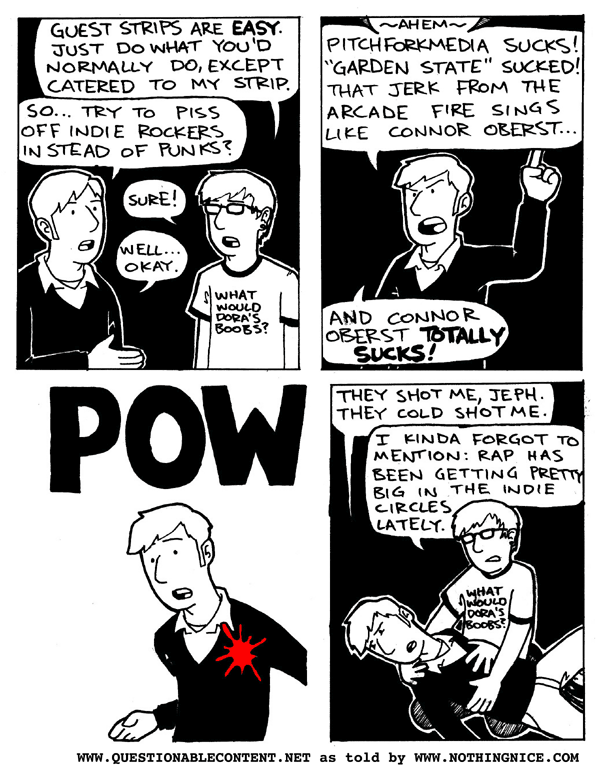 Holy crap, a guest strip! By the inimitable Mitch Clem of Nothing Nice to Say and Coffee Achievers fame, no less! I've been a longtime fan of Mitch's work, so when he said that he had an idea for a guest comic (and had in fact already drawn it earlier that day) I couldn't NOT accept his offer. Anyway, go check out his comics. They are good! Regular QC updates resume on Wednesday.

Another bonus of running this strip is that it gives me yet another day to get ahead on QC strips. I'm either four or five comics ahead right now, I'm not sure (that would involve counting, something I am not particularly good at). More buffer means more time to make each individual strip better. I'm quite pleased with what I've got in the pipeline, and I think you will be too.

Don't forget that on Wednesday night at 7pm I will be giving a talk with RStevens about webcomicy stuff at Boston University! It's free and open to the public so if you're in the area, come on out. It'll be a good time. Click here for the specifics.

The original art I put up for auction has already been bid up to about ten times what I was expecting. I'll try to sweeten the deal for the eventual winner by throwing in a couple stickers or something, that is a lot more money than I was expecting it to go for and it's not even over yet.

Okay I think that is it for tonight. I spent three hours catching up on email today and I still have a lot of stuff from February to answer. See you tomorrow.